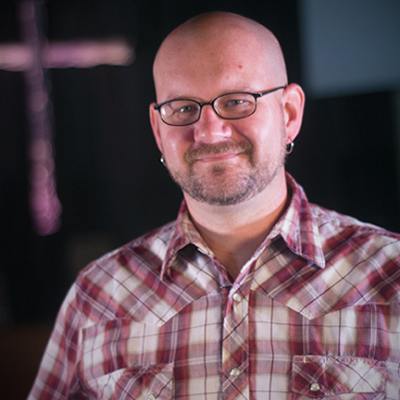 Tyler has been involved with the Cumberland Presbyterian Church since about 1981. He spent much of his childhood in the Fairfield congregation in Illinois. Tyler earned a bachelor’s degree in Marketing at Southern Illinois University at Carbondale.

After college he moved to Danville, VA where he volunteered for a few years with a youth group and was later hired by the congregation on a part-time basis. Shortly after taking the position, Tusculum Cumberland Presbyterian in Nashville, TN called and offered him a full-time position. That was October 2000, and he’s still here.

Tyler has a beautiful wife, Brittany, and two beautiful daughters, Elizabeth Ryan and Taylor Alexis, who light up every room they enter. He is thankful for the grace and love of God displayed by all of them.

Bryan is a singer who has spent over 30 years in the professional music industry, much of that time singing with The Voices of Liberty, Disney’s premiere a cappella ensemble at EPCOT’s American Pavilion in Orlando, Florida.

Along with his years as a professional musician, Bryan is also a sought out vocal consultant/musical director for a variety of clients nationwide. Much of that work has been behind the scenes as a studio vocalist in Nashville, Orlando, Chicago, Indianapolis, Memphis, and Los Angeles.

Originally from Sanford, Florida, Bryan came to faith in Christ as a teenager following a Youth For Christ concert in Orlando. Since that time, he has always had a deep love for church music and has enjoyed many years as a minister of music in local church ministries across the country.

Bryan is the proud father of his daughter Madi, a veterinary assistant, and his son Rob, a soldier in the Army National Guard and political science major in college.